What type of organisation do you see before you if I tell you that there is no top down strategy, no pre-defined roles, no budgets, no performance targets, full transparency and sharing of information (incl. financials), self-organising teams, fully decentralised decision-making, and where change management is a superfluous concept? Does a vision of some hippie commune, Kibbutz style co-operative emerge or perhaps a not-for profit charity type organisation?

What if I then say that it is not only a single organisation but a suite of very successful organisations ranging in size from around 100 employees to 10s of thousands of employees, across industries and in both the not for profit and for profit sector?

Perhaps you are asking yourself how you could run a large organisation without the foundations; a clear strategy, clear roles and accountabilities, levels of authority, defined performance targets cascaded down the organisation to measure how well strategy is executed, a well-developed project management framework with its associated budgets and Gantt charts, annual performance reviews and all the other practices we’ve been conditioned to believe are essential. 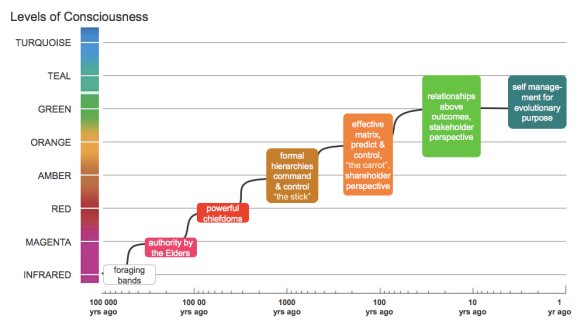 Plotting the successive stages of human and organisational consciousness on a timeline, the results tell a clear story; evolution seems to be accelerating, and accelerating ever faster. We have according to Laloux never been in time where so many people operated from some many different levels of consciousness at the same time. The same is true for organisations, Red, Amber, Orange, and Green Organisations are found working side by side in the same cultures and cities.

The difference between the organisations that Frederic Laloux has researched for this book and most other organisations today is not only stark but also incredibly exciting – not only is there is a better way, but there is plenty of evidence of its positive impact on people and its longevity.

Now here is the catch – you will only see the potential and the power of these practices if your adult development stage aligns with this worldview. As humans, we develop in stages, just as a caterpillar through sudden transformations becomes a butterfly, or a tadpole a frog. A key aspect of human development stages is that there is nothing inherently better or worst being at any level – it makes no sense saying that an adult is better than a toddler. However, depending on the task a certain stage may be a better fit. I have referred to adult development in previous posts, click here for link.

For anyone familiar with the Cynefin framework it quickly becomes evident that the practices that these organisations share are well suited for operating in complex environments. There is an incredible shared sense of purpose, which guides decision making on a day-to-day basis. There are also just a few clear and simple rules or principles that guide what is acceptable behaviour. This allows for initiatives to emerge and if there is merit in them, people will naturally support them and give them their energy. Because decision-making is so inclusive and closely tied to the organisational purpose, change does not have to be “managed” in the way we think about it in traditional organisations.

Below are some of the practices that are common and represent what Laloux refers to as Teal Organisations. If you read these and think – how crazy, could never work, maybe it is time to reflect on your view of people – are you a Theory X or a Theory Y supporter?

Each level of consciousness has brought with it some breakthroughs compared with the previous level. For Teal organisations these are; Self-management, Wholeness, and Evolutionary Purpose.

The following is quoted directly from a summary of the book by Ulrich Gerndt from Change Factory.

Self-management: operate effectively, even at a large scale, with a system based on peer relationships, without the need for either hierarchy or consensus.

Wholeness: practices that invite us to reclaim our inner wholeness and bring all of who we are to work, instead of with a narrow “professional” self / “masculine resolve” etc.

Evolutionary Purpose: organizations seen as having a life and a sense of direction of their own. Instead of trying to predict and control the future, members of the organization are invited to listen in and understand what the organization wants to become, what purpose it wants to serve.

This book really shifted my thinking about organisations and leadership; maybe I read it at the right time in my life and/or at a juncture where my understanding of complexity was sufficient to enable this shift. Either way, it was the straw that broke the proverbial camel’s back with respect to my long-standing relationship with Elliott Jaques and structured hierarchy. The more I am learning about complexity the harder this relationship has become. Faced with evidence that disprove my current view – I now have to dismiss some of the concepts I have been working with and often promoted for a long time, or at least recognise their limitations in complex environments.

I had an exchange with Jurgen Appelo a few months ago where we debated the idea of levels of work in manager – subordinate relationships. Jurgen has for a long time argued that management is too important to leave to the managers, I now feel that I have a much better idea of where he is coming from.

I still maintain that people have different levels of capability and that a successful outcome is to some extent dependent on a good match between complexity and capability. However, this does not have to be formalised through a hierarchy with defined role vested authority and accountability, personally earned authority seems to suffice. Collectively we are smarter than any individual is and not many complex tasks are completed in isolation from everyone else in the organisation.

The sad part of the research findings that underpins the book (although not surprising) is that Frederic was not able to point to any examples of organisations shifting and sustaining Teal practices without the following two conditions:

All the adult development theories I have come across suggest that only a relatively small percentage of the adult population is at a post-conventional or in a later developmental stage akin to that of Teal Organisations. Possibly even fewer in leadership positions where they could affect any change. Most operate from a conventional stage and hence we have so many of the achievement driven organisations we see and potentially work in today.

So perhaps given that last paragraph I should not totally give up on all of the ideas and concepts from RO and Systems Leadership Theory, some may have a place in making orange and green organisations better in some ways even if they will not guide us into Teal territory.

Hopefully the pace of development truly is accelerating, as that is a prerequisite for more Teal organisations to emerge that more people get to the later stages of adult development. Even now we can start to see the how younger generations prefer to operate, it is in a similar fashion to what Gary Hamel, in his book “What Matters Now”,  notes are common practice on the web:

Interestingly though the language in the title of the book is very much from an Orange Achievement lens rather than a Teal one. Perhaps children growing up in today’s hyper connected, peer sharing world will be naturally drawn to organisations where Teal practices are in place? For my own son’s sanity I really hope he does not have to suffer through the same level of corporate BS that his parents have (and are still dealing with).

For a summary of the book visit www.reinventingorganizations.com or for a video http://www.youtube.com/watch?v=gcS04BI2sbk

This site uses Akismet to reduce spam. Learn how your comment data is processed.