Many (if not most) executive teams spend at least some time defining the values of their organisation. This usually involves some external consultant reinforcing the importance of this activity and how important this activity is for organisational culture. But is it really important, or is it just another useless smoke & mirrors exercise that plagues our modern day organisations?

Value statements usually travel in packs of five or six so probably another manifestation of Miller’s Law (7 ± 2). There are many problems with these and I will raise some issues here although I am sure there are more.

Whilst we might share the same values we can have very different views when it comes to the behaviours that we think represent these values.

With five or six on the list, some will not make the cut. What about the ones not made explicit, are they less important somehow? And why does the top team get to define these for everyone else?

An organisation I know well has Safety, Pride, Accountability, Collaboration, and Excellence as its values, although referred to as behaviours. Together they neatly spell SPACE so I’m sure the exec team and the consultants were really proud of creating that mnemonic.

When values are made explicitly and the organisation does not live up to them they quickly become a running joke. You try to collaborate with colleagues online but all web collaboration tools are blocked by the Internet filter. Forget sharing a large file using Dropbox or something similar, and getting access to a shared folder is a nightmare – but hey we value collaboration! It takes 20 plus weeks to get a person recruited to a role – but we are all about excellence.

Making values explicit is according to Dave Snowden rather silly and anyone with a rudimentary knowledge of Anthropology would agree that values are lost once published. They become part of the power language and often misused. [after I published this on LinkedIn I found this link to an old blog of Dave’s about this very topic]. Dave makes the point that values are best shared through parables where values are not made explicit,you have to infer what the lesson is yourself.

This view is supported by Systems Leadership Theory (SLT) which I have referred to in the past on this blog, suggests that culture is in fact created through peoples’ shared view of the behaviours that reflect positive or negative manifestations of a value.

Instead of talking about specific values SLT talks about the six universal core values which again funnily enough fits Miller’s Law. These six emerged from work done across the world and across cultures to narrow down what actually matters to people. 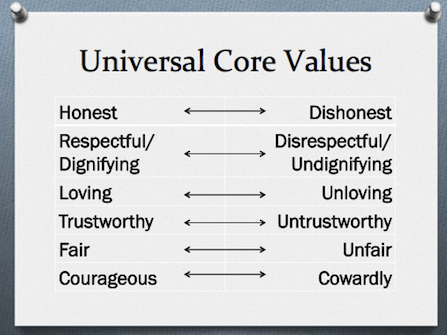 If you were to use values to try to shape behaviour in your organisation you have to make sure that they are more than just platitudes. Do the systems and symbols in the organisation actually reinforce the values or work against them, do people in leadership positions actively live them and understand the role they play in behaving accordingly?

The universal core values can be a helpful lens to consider how other people might interpret your actions. How will they make sense of what is going on, where would they place this behaviour on the values continua?

So what about the idea that values is a waste of time if all I was going to do was to come up with some new ones? I’m worried that the addiction to value statements is hard to drop cold turkey so the universal core values could be an interim step to recovery.

Of course if we have the courage to go all the way we could take a leaf from the nonviolent communication playbook and just focus our efforts on one thing:

This is the “anti-matter principle” by Bob Marshall @flowchainsensei, a principle that is making me think long and hard on many of my assumptions around organisations and work.

previous posts in case you missed them